A journey to the edge of the World

As the plane touches down at the Keflavik International Airport, the view through the window is dull, gloomy and disheartening. There are no trees, plants or greenery anywhere; no houses, no people, no signs of life; just a black, uninviting and godforsaken landscape – the kind commonly seen in Harry Potter movies; the kind that raises doubts whether coming alone to Iceland was a mistake after all. But very soon the efficient airport staff dispel some of those misgivings and make sure that the welcome, though not on a red-carpet, is sincere and genuine.

On the way to the Capital City Reykjavik, about 50 Kms away, the dismal landscape continues, with large patches of rumpled, bilious greenery. This is a volcanic country and it is the black lava, solidified over centuries, that gives visitors their first taste of what to expect. But here is a country that has vaulted itself to the top of the charts as one of the richest in the world – all within a period of 60 odd years. Having detached itself from Denmark in 1944, it has used its natural resources – fishing, sheep farming, energy and tourism – so judiciously that there is neither unemployment nor any poverty.  The formation of the European Union and the linking of several economies had knocked Iceland off-balance for a while. But it had enough acumen to re-bounce without too much damage. Having a small, manageable population has obviously helped. 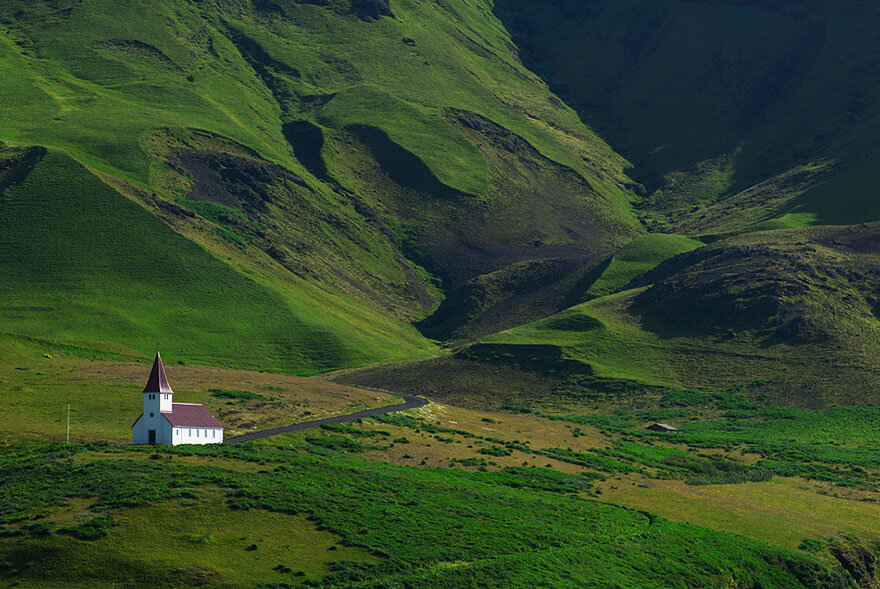 But this meagre demography has a tragicomic side as well. Spread out thinly over the Island in natty little towns, villages and farms, locally almost everybody is related to everybody else, which on the surface appears to be a great thing. But with weddings amongst blood relations – a sort of inbreeding – declared illegal, finding a marriage partner has become a major national pastime; with even the Government pitching in with a software mobile app to determine who is related to whom.

In spite of increasing affluence, better literacy and global exposure, Icelanders have endearingly retained some of their traditional beliefs and superstitions – as this little anecdote will suggest. Just outside Reykjavik is a monstrous Aluminium factory with American collaboration. When plans were being drawn up, the local investors developed cold feet and wanted the site to be examined for the presence of elves, fondly called the legendary ‘Little invisible People’, whom they didn’t want to displace. After many incredulous arguments and much cajoling, a local consultant was employed who finally gave the green signal, (and probably laughed his way to the bank).

Reykjavik, the Capital, mercifully, is a small city. All its major sights – the Lutheran Church, the View Point, the Saga Museum, the lake & town hall, the main shopping streets, the University, the waterfront – can all be easily covered by foot in a single day. (In September, the sun sets around 8.15 PM). But to soak in the City’s atmosphere, an extra day is well worth the expense.

Iceland is divided into 8 administrative regions that have no names but are numbered from 2 to 9. Its main Highway numbered 1, runs right around the island, and cuts through all the 8 regions, forming a loop of approximately 1500 Kms. Most of the farms, resorts, villages and towns branch off from this highway. The numbering of the branch roads is so simple (and sensible) that even a newcomer like me didn’t need the services of a GPS to locate a lonely farm in the middle of nowhere. If address given was “Farm Steig, end of Road 285”, it meant the 85th road, off Highway 1, in Region 2 and you were there.

Self-driven car for transport and lonely, isolated farms for night halts are the best ways to experience the many sights of Iceland. Packing enough eatables and drinks is essential because what is available en route may either be too expensive or not to one’s taste. Besides, it saves a lot of valuable sightseeing time. With six more days to cover a loop of 1500 Kms, there was ample time to set my own pace and to interact with the locals, most of whom, thankfully, could converse in English. As for the local language, unless you have done your homework well, it’s no use trying to pronounce or read any of the local signboards.

To give a descriptive narration of the landscape is a task far beyond my limited capacity. All I can throw at the reader are little teasers and vignettes of the constantly changing, and variety of the landscape, with some photographs to add their weight and to make up for a handicap. 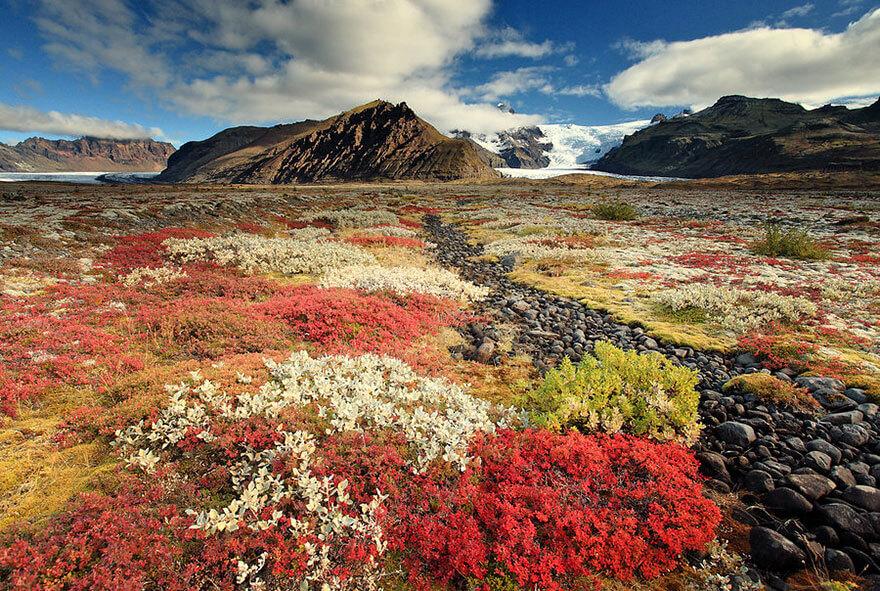 It is not very well known that Europe’s only desert is here, covering about a fifth of the island. The landscape, as you drive east, doesn’t let you forget that. There are copious rain, snow and plenty of rivers and lakes; but the hard black lava rocks just refuse to yield to any form of useful or productive life. Driving solo through this hazy and murky landscape, with poor visibility, feeble mobile signals and with not a soul in sight, was an eerie experience.

Further east is the majestic ice sheets that cover another fifth of the island. Inching down the mountains, like tired snakes, these glaciers are a grim and alarming reminder of the damage that humanity is inflicting upon the environment. Like the rest of the World, the Icelanders don’t really know what to do or how to reverse the trend and are waiting for initiatives to come from elsewhere. 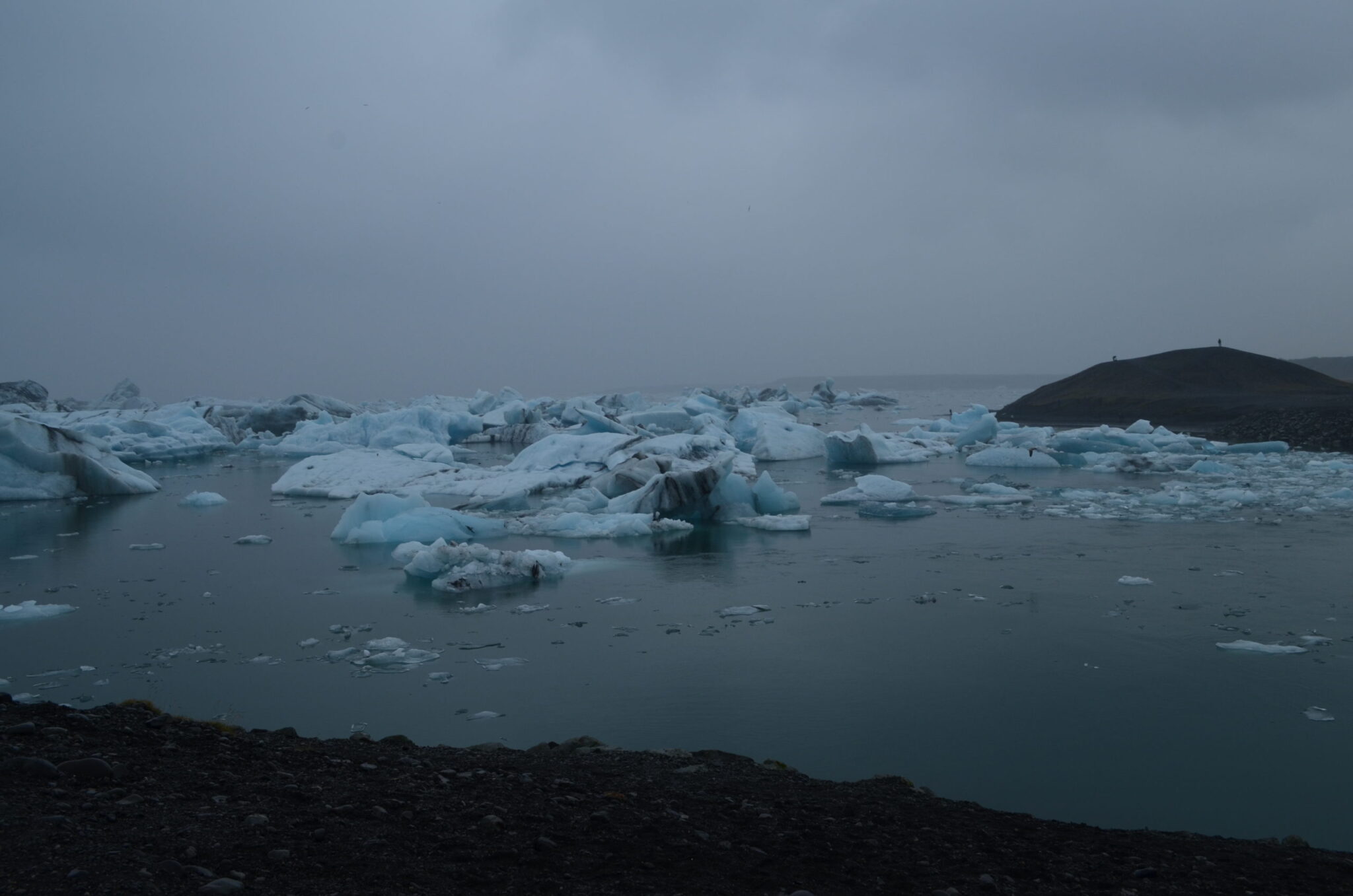 The fjords on the eastern seaboard – forming extremely beautiful silhouettes if you catch them in the early morning sunlight – are nowhere as intimidating or treacherous as those on the western side. But it was exhilarating driving through them. What wasn’t fun though, was that the driving surface would change at irregular intervals from the smooth tarred road to a pebbly gravelly track whose material attacked the car with such adhesive ferocity that it required 3 washes to get it all off. (Luckily self-help car wash are available free of charge at all fuel stops).

As the loop turns westwards at the little town of Egillastdir (the Eastern capital) and travels inland, the landscape changes drastically. Ascending through a lightly forested area we are atop a plateau and into a volcanic country. The clouds begin to darken in strange random patches, as if unable to decide where to pour their deluge. What initially looked like impending rain clouds, turned out to be methane gas emissions from long-dormant craters, many of which are accessible after long strenuous climbs and through bone-chilling winds. I wouldn’t have known about the emissions were it not for a Belgian student hitchhiker to whom I had given a lift. 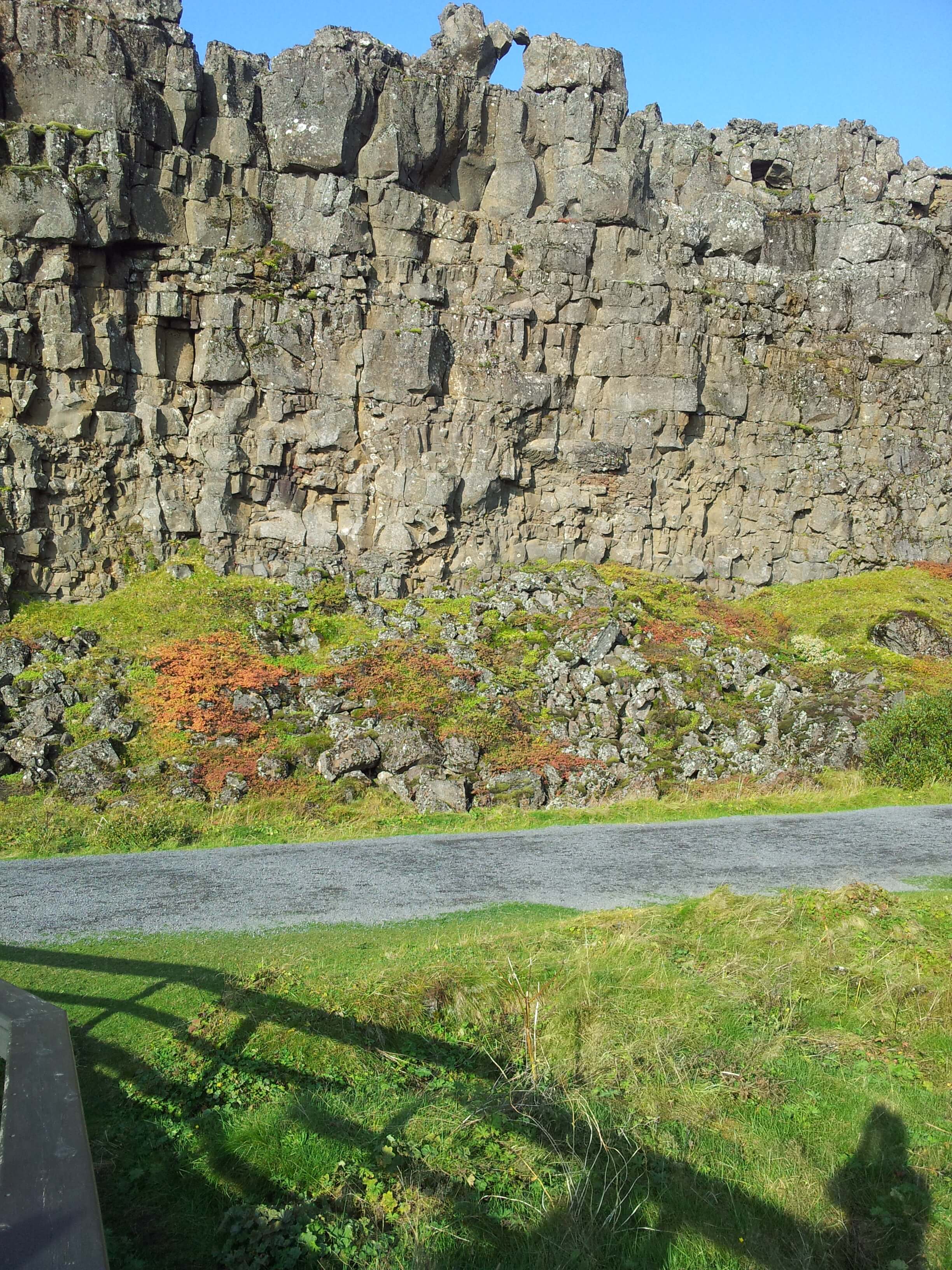 Akureyri (the northern capital) is the second largest city, with a laughable population of a mere 17000; but sprawling luxuriously over an area very disproportionate to its demography. From here on, Highway One gently starts turning south, back towards Reykjavik. It is now the turn of bubbling spas, warm springs and shooting jets of steam. Some of them give the impression of factories buried underground with just their exhaust sticking out. There is a faint whiff of sulphur in the air. Up close, there is an overpowering feeling of dread as if the earth were breathing beneath your feet and exhaling angry and futile jets of water like a chained dragon.

Like most European countries, Iceland has just learnt the trick of cashing in on some of its traditions, history and culture. Why not make money out of its folklores about elves and trolls! Why not claim that European history from The French Revolution onwards would have been completely different if its volcanoes had not spewed ashes and dust across Europe! Sounds far-fetched but who wants to spoil their party!

On the final stretch, Highway One dives into a 7 km long tunnel under the Hvalfjorour Fjord and comes out almost within touching distance of the Capital. The journey ends, a bit anti-climatically, from where it began – from a car rental showroom. 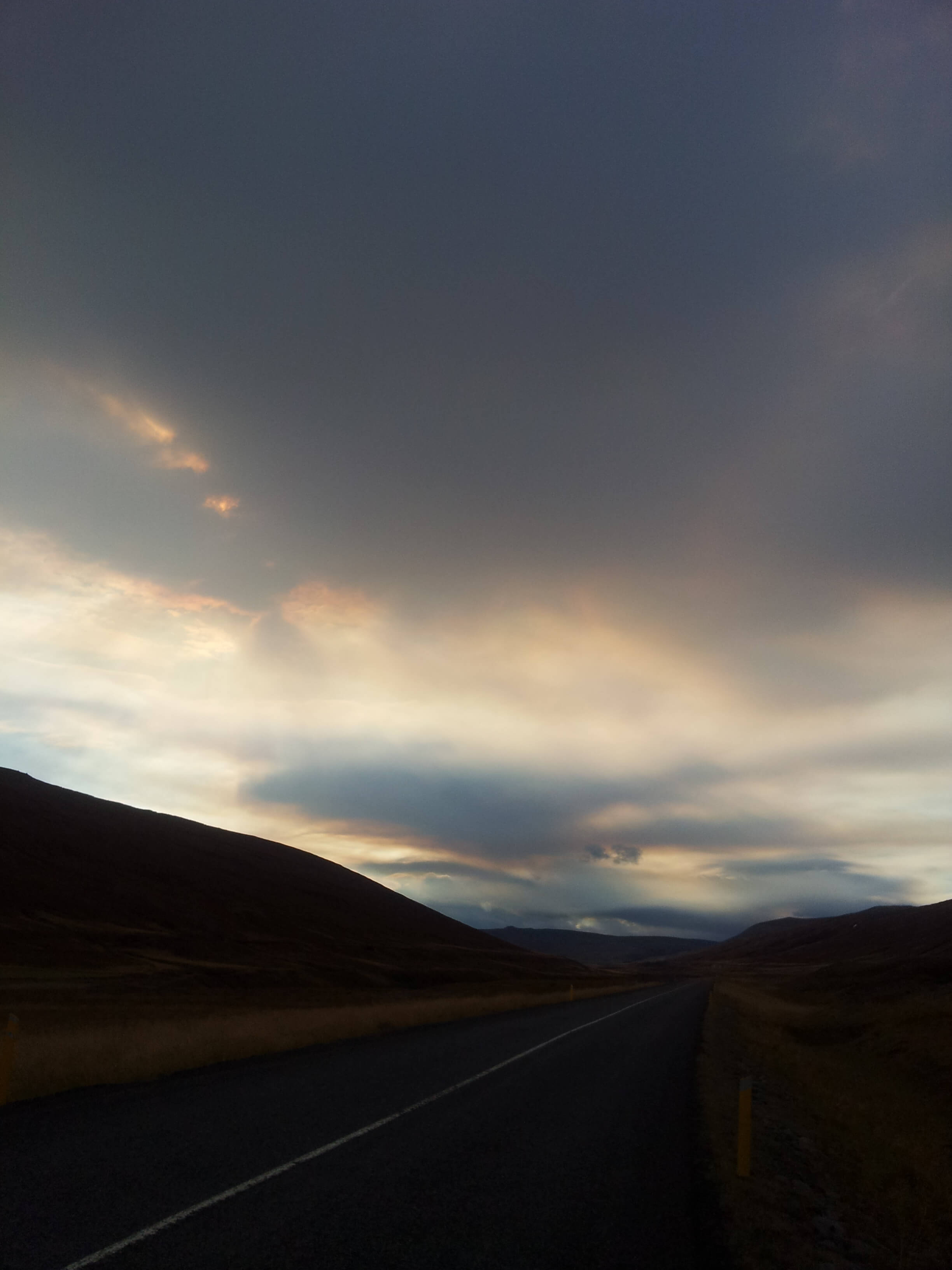 And as I try to recap the essence of my tour to Iceland, there is a realisation that this is no place for tomfoolery with nature. You come; contest with it at your own risk and capacity; admire it and leave.